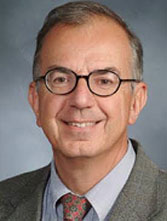 He received his MD from the University Of Milano School Of Medicine, in Italy, completed residency training in Clinical Hematology and in Pathology in the United Kingdom and in Italy. He is a Fellow of the Royal College of Pathology (England). He is Board Certified in Clinical Hematology by the University of Milano and in Anatomic Pathology by the University of Pavia. He is also Board Certified both in Anatomic Pathology and in Hematopathology by the American Board of Pathology. Before moving permanently to the USA in 1992, he was a staff pathologist at Istituto Nazionale dei Tumori of Milan.   He had previously served as Director of Hematopathology at Columbia University Medical Canter in New York and at Indiana University School of Medicine in Indianapolis, Indiana.

He lists about 240 peer-reviewed medical journal articles and 44 book chapters primarily on hematopathology, including fourteen chapters of the current WHO 2008 Classification of Tumours of Hematopoietic and Lymphoid tissue. He is the lead editor of one of the major pathology textbooks: Knowles Neoplastic Hematopathology 3rd Edition. He is the lead author or a co-author in three additional textbooks: Illustrated Pathology of the Bone Marrow, Benign and Reactive Conditions of Lymph Node and Spleen, and Disorders of the Spleen. He is active member of several international pathology associations and is currently the past chairperson of the European Bone Marrow Working Group and EXCO member of the European Association for Hematopathology. Previously held offices include the Presidency of the New York Pathological Society and EXCO membership in the Society for Hematopathology. He is a contributor for the 8th Edition of the AJCC Cancer Staging System.  Dr. Orazi has served and is currently serving on the Clinical Advisory Committee as well as in the writing group for the WHO Classification of Hematopoietic and Lymphoid Tissues Tumours. He participated to the most recent updates of the WHO Classification of Tumours of Lung, Pleura, Thymus and Heart (in press 2014) and was one of the main presenters at the Clinical Advisory Meeting for the Updates to the WHO Classification of Tumours of Hematopoietic and Lymphoid tissue which was held in Chicago, IL in 2014.

Dr. Orazi is currently the Associate Director of the Tutorial on Neoplastic Hematopathology. This highly prestigious educational effort directed by Dr. Daniel Knowles, is the longest continuously running educational program in hematopathology in the world. It was originally started by the late Professor Henry Rappaport. He also lectures extensively during the five day Tutorial program. In addition, he has frequently directed or presented courses on hematopathology-related topics including four Short Courses at the United States and Canadian Academy of Pathology, and overseas in numerous events, and is a member of several Editorial Boards. Dr. Orazi is listed in “Who’s Who in America” and “Who’s Who in Medicine” as well as in “New York Best Doctors” published by New York Magazine and in the “SuperDoctors – NY Metro Area” published by the New York Times.